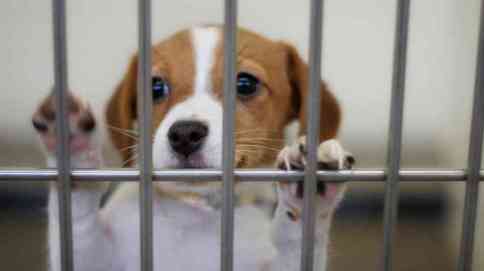 On Thursday I attended a community forum about our local animal shelter, the Rockingham-Harrisonburg SPCA. For years many local folks have been pushing to get this shelter to adopt modern practices which would save more lives. The R-H SPCA has a much higher “euthanasia” rate than many surrounding animal shelters of similar size, type and resources.

At the forum the room was packed, and stories about the shelter’s insularity, apathy, and apparent incompetence poured out. Several former volunteers spoke out, as did well-respected rescue groups the shelter refuses to work with.

The room was electrified when a former employee (who left to go to school) spoke about the dog manager. She stated that the dog manager is abusive toward many of the dogs in her “care”, cursing them and deliberately trying to incite aggression from them so she can label them “dangerous” and put them down.

Why is this being allowed to happen? Why has this employee not been fired?

I think it’s because doing an inhumane job as a routine brutalizes the person doing it. This shelter has had such a high kill rate for so many years, that the workers have become hardened to suffering and death. With so many other shelters now saving over 90% of their animals, people whose compassion hasn’t been stunted can’t work at a high-kill shelter like this one for long.

PETA, an organization I used to respect, turns out to have this weird, cultish “kill-them-to-save-them” mentality about companion animals. I didn’t believe this when I first heard it, but I have since done my homework and it is true – they pick up or take in healthy cats and dogs, make no attempt to adopt them out, and kill 90% of them. The reasoning seems to be that death is preferable to the “slavery” of living as a pet. To date, PETA has been doing this with impunity.

If an individual kills a cat or a dog for no reason, that person can get jail time. But if a Virginia shelter does it, it’s no problem. Shelters don’t have to have adoptions as their goal. Strays can be killed after a legal holding period. Animals surrendered by their owners can be killed immediately; no waiting period or reason required.

Up until last year, this is how “Private Animal Shelter” was defined in Virginia law:

2014 “a building… that is used to contain a primary enclosure or enclosures in which animals are housed or kept. (perfectly fine to “euthanize” every animal, no homes need be found).

Animal advocates got this law changed in 2015, so it now reads:

2015: “a facility operated for the purpose of finding permanent adoptive homes for animals that is used to house or contain animals… (what most of us think of as a shelter).

This change got PETA all upset. Now amendments have been proposed to take the teeth back out of this new protective law.

2016: “a facility operated for the purpose of finding permanent adoptive homes for animals – or for any other purpose authorized under this chapter (creating wriggle room for not bothering with adoptions.)

To further bolster a shelter’s ability to do whatever they want, also proposed is:

Any new guideline that the State sets for protection of shelter animals:

shall not have the force of law

A guidance document shall not be the basis for issuance or denial of an approval letter for the operation of a private animal shelter. (In other words, any new protection regulations enacted don’t have to be followed by a shelter.)

It is beyond belief to me that PETA would consider it “ethical treatment of animals” to kill healthy, adoptable dogs and cats.

But PETA is not alone. My local shelter, the Rockingham-Harrisonburg SPCA, is run by Anne Anderson, who is on the steering committee for a group called the Virginia Alliance of Animal Shelters (VAAS), (not to be confused with the Virginia Federation of Humane Societies). The group subscribes to the inaccurate and outdated notion that any group saving 90% or more of its animals does so because it “picks and chooses” the animals it takes in.

VAAS is supporting these changes in the new law, which would effectively make shelters not accountable to the public for what goes on in their back rooms.

If you love cats and/or dogs, and you live in Virginia, I ask you to contact your state representative right now and ask him to work AGAINST HB-156, HB-157, and HB340. (Find your representatives here: http://whosmy.virginiageneralassembly.gov/ ). Send an email or leave a phone message.

Changing laws is only one little piece of animal welfare, and it moves exceedingly slowly. But it makes a vast difference.

9 thoughts on “On a more serious note…”